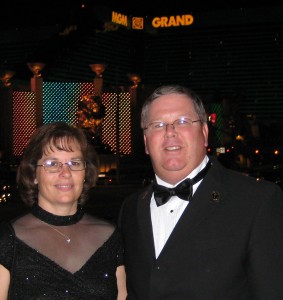 I spent 31 years working for someone else helping them be successful and building their futures. When I was introduced to Legal Shield in 2002, it was with a VHS video showing the product. After seeing the value, I said yes sign me up for this. After I finished filling out the application, I then asked if they were looking for anyone else to help market the services. I also became an Associate the same day, September 29, 2002. I was a little slow getting started with Legal Shield since I was a Store Manager for Dillons Food Stores, (subsidiary of Kroger) and it was during the fall, going into Thanksgiving and Christmas which is always busy. However, I did make over $2,000 in 3 months selling only the legal plan as ID theft was not available yet. My wife, Cherie and I went to a group school the following summer and began marketing groups on a part-time basis. After 2 more years, I began to see a real opportunity to not only make a lot of money, but leave my JOB and become my own boss.
March 1, 2005 I became a full-time Legal Shield Associate, focusing mostly on group business. We have been on Performance Club every month since August 2003 and qualifying for amazing incentive trips every year to some of the most elaborate venues. Cherie and I received our $100,000 ring in September 2007 in Las Vegas at the MGM Grand from Mr. Wilburn Smith, (a true icon in our company). Through 2014 we have sold over 5,500 personal membership sales and continue to work the business, opening over 30 school districts among our 100 companies we service and helping everyone have the “Peace of Mind” Mr. Stonecipher always envisioned.
We really give a lot of praise to our Lord and Savior Jesus Christ for bringing this opportunity to us and helping us become successful. Also we are so very thankful to our mentor and team leader Mr. Ken Moore. He has always been there for anything we have ever needed, showing appreciation and compassion for us, not only as Associates, but as friends. I also thank those who have helped when I’ve needed support, Linda Bowden and Jimmy Parrish.
The only ones, who never succeed, never endure the race.
Bob & Cherie Pilcher

The most prepared are the most dedicated.~Raymond Berry
Posting....
Loading Comments...